[God of War Ragnarok] is one of the most anticipated games of 2022 and has people around the world hyped, as the kids say. But it’s only coming to PlayStation consoles. Well don’t worry Xbox players, someone has spent at least 20 minutes developing an Xbox version of God of War. Except it uh…sucks, looks terrible, and is likely unauthorized by Sony.

[As spotted by Eurogamer], there’s a new and fairly cheap action game available on Xbox that seems to star Kratos. The game has the not-at-all-clunky title of War Gods Zeus of Child* and is available for $4.09 in the US. Seems like a deal, until you see the game in action.

The game has no sound effects or music, limited animations that are easily broken, and there’s no real depth to it. It’s just waves of the same enemy attacking Kratos over and over as he flails about, killing them and earning a point for each one vanquished. Nearly everything in the game looks to be an asset ripped from somewhere else, including the enemies, which seem to be a monster from a Resident Evil game. Also, the title screen for the game has a different name, “God of Warning .”

Here’s a link to it’s gameplay,how would you rate this game ? 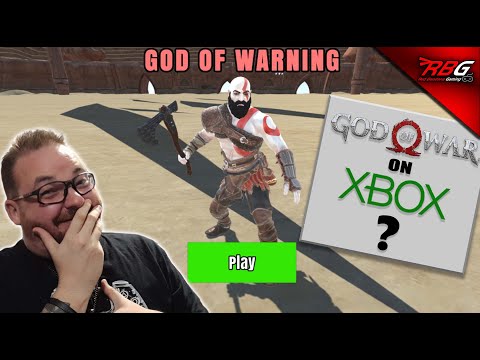 There’s going to be a trend of rapidly developed Cookie cutter, Asset flip games that are made to make a quick buck and capitalise off of big titles clout , these scammers are going to make it hard for small indie developers to self publish once Microsoft and others introduce stringent review , seems Microsoft is only automatically scanning for things like explicit nudity and presence of harmful code that’s why a game like this that clearly ripped an IP slipped through, although it could be argued that the character isn’t kratos but a look alike inspired by him but is the timing of the release of a coincidence too?

. Many people might buy it just to make fun of it or because everyone is doing it as part of these mindless internet trends and he’ll make a couple of bucks before it’s eventually struck down(which might not even happen )

Considering it’s an exclusive IP developed by a first party studio am sure Sony won’t like it if someone is biting a chunk off their pie, the developer of that knock-off is likely going to get a cease and desist letter from SIE. I wonder if they’ll go over the top like Nintendo, with an expensive legal battle to act as a lesson to everyone that their IPs are off limits (remember flappy bird? Romours has it that Nintendo came for him because of the pipe’s in that game resembling those in the mario series, or soulja boy getting his website that sold generic white label consoles that were packed with emulated retro Nintendo games ceased by Nintendo and redirected it to the official Nintendo online store, Nintendo don’t play around)

There are artist that sell 3d models of popular characters that are protected IPs , It usually seen as harmless fan art especially if they are unique renditions of the artists vision modelled from scratch but the same tame attitude doesn’t hold true for merchandise like t-shirts, books or toys where you have to acquire a license to use imageries from their IPs. Some 3d asset stores even sell models reaped directly from games, the model from that GoW knock-off looks exactly like the one from the game down to the small details, I don’t think it’s possible to reap it from the console because I believe the contents on the game disk or those saved to the hard disk are encrypted at rest but I may be mistaken.